Article 5 of the Constitution Summary

Click here or scroll down for a summary of Article 5 of the Constitution.

Article 5 of the Constitution
“The Congress, whenever two thirds of both Houses shall deem it necessary, shall propose Amendments to this Constitution, or, on the Application of the Legislatures of two thirds of the several States, shall call a Convention for proposing Amendments, which, in either Case, shall be valid to all Intents and Purposes, as Part of this Constitution, when ratified by the Legislatures of three fourths of the several States, or by Conventions in three fourths thereof, as the one or the other Mode of Ratification may be proposed by the Congress; Provided that no Amendment which may be made prior to the Year One thousand eight hundred and eight shall in any Manner affect the first and fourth Clauses in the Ninth Section of the first Article; and that no State, without its Consent, shall be deprived of its equal Suffrage in the Senate.”

Article 5 of the Constitution summarises how the United States Constitution can be changed or amended from its original wording.

The constitutional amendment process was built into the Constitution

Article 5 of the US Constitution Explains the Amendment Process

These first amendments – ten in all – are collectively called the Bill of Rights.

Writers of the Constitution allowed change in the future

Why did the framers of the constitution include the amendment process?

Under the procedures specified in Article 5, the Constitution has been amended twenty-seven times. The first ten were adopted in 1791 as the Bill of Rights. The other seventeen amendments were adopted between 1795 and 1992.

There are two ways to amend the Constitution.

The first method is that an amendment can be proposed from either the House of Representatives or the Senate and then sent for approval by the state legislatures.

The second method is for a state or states to call for a constitutional convention. Both houses need to approve this proposal of Congress.

How many states must ratify an amendment?

In either case, an amendment proposal must pass in both the House and Senate by a two-thirds majority and must then be ratified by three-quarters of the state legislatures (this would currently require ratification by 38 states).

Ratification is the process by which an amendment or a constitution is approved by the states and for it to become law.

The 3rd and 4th ways to amend the Constitution

However, looking deeper, there are four ways to amend the US Constitution. Here are the four ways the constitution can be amended:

The first is the method that has been used for all but one of the amendments.

The fourth method was used for the 21st Amendment (which repealed the 18th Amendment, ending Prohibition).

Methods two and three have never been used to pass a constitutional amendment.

Another version of method three is that the states can call on Congress to convene a convention. Usually, a time limit is imposed in the amendment’s writing (typically seven years) so that the process will not be dragged out indefinitely.

If the time limit expires before the required three-fourths majority ratifies the amendment, the amendment fails to become law.

The Difficult Process of Amending the Constitution

The four methods to amend the Constitution are tedious and challenging to achieve. The requirement to work through both houses of Congress and the state governments’ legislatures is a significant obstacle to overcome because of the large number of legislators involved. A considerable number of these legislators need to agree on the need for and wording of the proposed amendment. 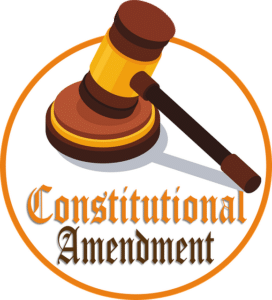 A two-thirds majority must be reached in both the House and Senate and at least three-quarters of the states must ratify it. Otherwise, the proposed amendment will be defeated.

There are numerous places in this adoption process where it can go awry. For an amendment to succeed in being adopted, there must be a high degree of bipartisan cooperation.

Maintaining the Stability of the Government

Why did the framers make changing the Constitution so difficult in Article 5?

One reason was that the framers needed to lock in the political deals made to get the Constitution ratified. Several states made it known they would not vote in favor of the Constitution if certain rights were not guaranteed.

Even as the Constitution’s merits were being debated in the state legislatures, the framers worked on the first twelve amendments to be adopted right away.

As it turned out, two of those amendments were rejected, but ten were ratified (the Bill of Rights) soon after the Constitution was adopted. As a result, article 5 was created to make it possible for amendments to be adopted to the Constitution.

The more important reason to make the amendment process difficult was a more visionary idea. The framers believed that making changes to the Constitution a lengthy and difficult process would help maintain the nation’s laws stability.

They did not want it to be possible for arbitrary changes to be made to the Constitution, yet if changes were needed, the difficulty would guarantee that the change was needed and well thought out.

Another safeguard to keep the nation’s ruling document’s stability is that Article 5 stipulates that no amendment may change the 1st and 4th clauses in the Ninth Section of Article 1.

Moreover, article 5 says no amendment can deprive a state of its full representation in the US Senate.

Article 5 also says that the US President has no role in any part of the formal amendment process.

In Article 5, the US Constitution writers carefully crafted a document to ensure the new country’s strength and stability. As a result, the Constitution has helped maintain the United States government’s stability for well over 200 years.

Resources related to “Article 5 of the Constitution Summary”:

Pictures Explain: Article 2 of US Constitution in Simple Terms

Article 1 of the Constitution